Trip details:
Tioga Road Opening Day.
Two days.
From the Yosemite Falls trailhead to North Dome: 7.25 miles, with an elevation gain/loss of  5934/1400 ft.
It took me about four hours of travel time.
From North Dome to the Valley: 9.5 miles, with an elevation gain/loss of 1496/4875 ft.
I don't remember how long it took me, but I think it was about another 4 hours, travel time.
Author: Jason 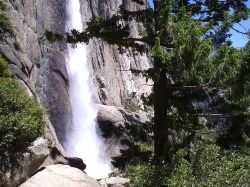 I had been wanting to check out this area for a long time, so I took off from the Lodge at about 10am with a light weekend pack and made my way up the Falls Trail. This is the fourth time I have hiked up the falls trail and, I must admit, it actually seems to be getting shorter.

I hit the top of the falls without seeing a single used water bottle that someone left about. This is pretty cool, considering how popular this trail is. There wasn't much trash at all, really, which was surprising.

Above the falls, sitting next to Yosemite Creek, I stopped in a bit of shade to fill up on water and grab a bite to eat. I also got a chance to chat a bit with a thru-hiker from Huntington beach. As it turns out, this guy is a big thru-hiker who has done numerous long distance hikes and will be attempting to break the PCT speed record the following year.

We get to chatting , and before I know it, we're like a couple of teenagers talking about the prettiest girl in school, all excited about backpacking, about gear, and about people we've met and the experiences we've had. He fills me in on his hiking food, which, interestingly enough, is entirely strictly vegetarian (no animal products whatsoever) and entails no cooking. Not for any other reason than this is what he has learned as a sustainable, light weight, simple way of eating for long periods of time when his body in put under great demand. I thought this was really cool, especially since every once in a while I get harangued about how I need X amount of protein and vegetarians don't get enough protein in their diets, blah, blah, blah. Somehow, people must think I sit around eating rice all day.

After chatting for about and hour, we head off in opposite directions and I realize that I had a great time talking with this guy, he was just really nice. But when I first met him, I thought he was seriously obnoxious and sorta shied away. He was only being friendly but I felt he was being needy. I have no doubt now that HIS neediness had nothing to do with it, other than I realized that is precisely how I feel sometimes when I am out on solo backpacking trips. But, who wouldn't want to be able to share such great experiences with other people? Especially, out in the backcountry, with people whom we know share some of the same passions for the wilderness that we do. All of this seems perfectly reasonable now, but what I understand now is that I felt some shame in wanting to connect with other people, especially people with whom I obviously shared a passion.

So, I hit the top of the falls, Yosemite Point, I chatted a bit with a San Fransisco Sierra Club group and headed off to North Dome. 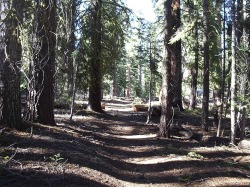 Since rising above the Valley treeline, it has been pretty rocky with a good number of people about and remained so until I topped out and the trail leveled off above Yosemite point. I finally get some shade which I regrettably have to share with the mosquitoes. It doesn't get too bad, except at the Indian Canyon, Lehamite and Royal Arches creeks. I pass on water on all of these, hoping to find water at the south fork of the Royal Arches creek. The creek is dried up at the trail, but I go off trail downstream until I find water.

I was completely swarmed, but with the new little quick release connections on my Camelbak, I jammed out of there pretty quickly. The mosquitoes dissipated once I got out of the forest and onto Indian Ridge. This would be the last known water source until I exit the Indian Rock area tomorrow. The idea of bringing another water reservoir for situations like this occurs to me and I mentally file it away for my return home.

I hit the top of the ridge and inhaled the view of Half Dome and, as I made my way to the trail that led to North Dome, I saw something else amazing.

There was a group of people on North Dome and one of them, an idiot with a yellow shirt, was trundling a boulder off the west side. I could not believe it, but then again, I could. I really hoped that there were no climbing parties down there. I was too far away to do anything but watch. The boulder rolled, but stopped before it could go over. The idiot thankfully gave up on the attempt and walked off. I continued my hike.

Sunset was still far off as I hiked down the east side of Indian Ridge, but I walked into shadows and more mosquitoes. This little quiet area of the park would only be enhanced by making it more remote from Tioga road. A secluded, shady, quaint little hideaway just seemed really cool. I guess for no good reason. I just liked it. I hiked up the short way to the top of North Dome where I found Mr. Yellow shirt and his buddies. 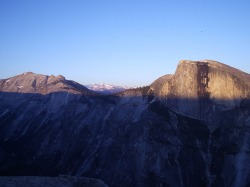 It was a beautiful afternoon and I felt like relaxing and enjoying the view. I set down on the northern side of North Dome and relaxed under a little tree, admiring Tis-as-ack, as she continued her eternal silent weeping. I casually ate dinner and wondered what issues were in me that were as unchangeable as Tis-as-ack's eternal sorrow. I thought of the hiker that I hung out with earlier and wondered, how often do I push people away, how do I do it and why do I do it? A reaction in defense, but in defense of what? Protecting what?

I sat and meditated, allowing my mind to clear. I didn't have any answers now, but I knew they would come. So, I sat and did not think.

The next morning was incredible, waking on top of the Valley. I quickly broke camp while I ate breakfast and made some coffee.

With my pack now on my back, I leisurely strolled around the dome and sipped at my coffee. By the time I made it to the base of the dome, the young party from the night before had already left. I made my way up to the summit of Indian Ridge and met Don from YosemitePictures.com. We chatted it up a bit, swapping stories about hiking and Yosemite and tourons. 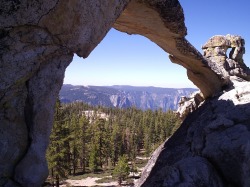 We parted and I made my way to Arch Rock, the only rock arch in YNP (but not really).

Next came Indian Rock. I thought this little formation was really cool, well, not really, but I liked the view.
By this time I had expectedly run out of water, not a big deal as I knew there were streams nearby.
I departed from Indian Rock to the South, the way I came, as the view from the top showed only piles of rock rubble to the North that did not look too appealing for a descent. I hit the trail without incident and cruised down the beautiful trail to the Snow Creek trail, which led to the Valley floor. I've hiked this trail only once before, about three years ago, when I was groveling. Its an easy descent, but long. But, be advised, this trail is commonly dry and very hot in summer - so fill up at Snow Creek before descending. The view was dandy though and before I knew it, I was back in the Valley, amongst the teeming throngs.

It was certainly a nice weekend hike, very easy, very mellow, The hike out of the Valley is nothing to shake a stick at, but since the mileage was so low, it was easy to wander about and take my time.