Half Moon Meadow To Tuolumne Meadows, The Ten Lakes Trail 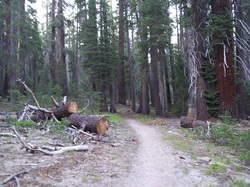 Click any photo to enlarge
I received a head start on this trip by working in the Tuolumne Meadows area. I finished work at 4PM, showered and got a ride from Gary to the trailhead where Tioga Rd. met with Yosemite Creek. I ambled merrily up the easy clear trail while admiring the summer flowers, gentle granite and broken forest landscape for a few hours until a little bit after dark. I donned my headlamp, hoping to camp in Half Moon meadow, but instead, after losing the trail a few times, I merely sought a flat spot to crash.
I dropped pack over a little ridge,  scanned the vicinity with my headlamp, moving in a widening circular pattern for any traces of the trail. I wasn’t worried that I wouldn’t find the trail -- I just wanted to make sure I wasn’t sleeping on it.
I brushed my teeth, evicted my bear canister and unfurled my bivy sack. I stuffed my little sleeping bag inside and snuggled with some of my favorite backpacking sleeping buddies: my camera, iPod and fuel. The two former in my backpack lid with some of their acquaintances and the fuel canister nestled like a dog at my feet to keep warm. I quickly fell asleep with visions of this long awaited trip dancing in my mind. 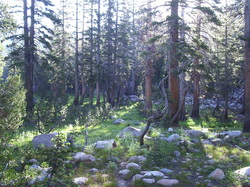 Sleep swept me away effortlessly, but I had my share of visitors through the night. Bears crackling though the deadfall. Then later knocking around my canister. Then after I had fallen off to a blissful sleep, I think either a Tigger or a marmot jumped on me.

I was starting to get mad. Can’t these kids go partying somewhere else in the forest? I drifted off to sleep only to be awakened again by the sounds of a bear slowly crunching through the thick bed of sticks and twigs that were all around me for a hundred feet. “Lets see how slow I can go to maximize the noise.” Cruuunch...cruuunch...cruuunch. Finally, I sat up and yelled at the bear to stop making all that noise and to F-off. Not really mature of me.
Well, my little tantrum payed off and I was able to sleep though the rest of the night and this time gently awakened to the sunbeams greeting me through the trees. I packed my Lightsabre and made for Grant Lakes for breakfast and coffee. 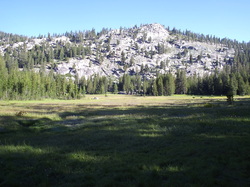 Halfmoon Meadow was beautiful in the morning light. Water gathered and flowed from the southern end, forming a small creek. Farther on, I came across a couple of secluded bivy sites. I moved out to the trail up to Ten Lakes pass. It was up well defined switchbacks. The fork to Grant Lakes was easy to spot and the short hike to the lower lake very pleasant. I met another backpacker there who had a surplus of oatmeal and generously offered me some. We ate breakfast and casually chatted. Then I shot some photos and hiked out for Ten Lakes. 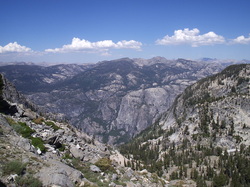 _I headed back to the sandy trail for and turned north-east. An easy hike brought me to the top of the Ten Lakes area and I could look down on the first few. I hiked down the switchbacks and had began considering camping at one of the lower lakes, but there was a lot of people there already so I continued on, which I did not mind at all as it was still only around noon. 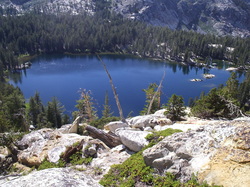 On the trail out the lower part of the Ten Lakes, I came passed a couple As it happened, I was carrying electrical tape for the solar ipod charger I was testing. We chatted a little bit about solar chargers, shoes and whatnot and continued on in our separate directions. I was heading back up hill, past the lower lakes and was loving getting away from the weekend groups at the lower lakes. Leaving the small valley behind me, I moved into the tress as the trail leveled out. Before I knew it, I was at another one of the Ten Lakes. 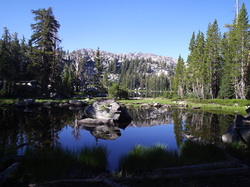 This lake was a bit cooler, a little higher in elevation, and more shaded with trees. While it was only early afternoon, Iooked for a secluded place to bivy and explored the lake a little bit. The area around the lake has numerous locations for a small bivy and a couple of larger sites that look well used, although very close to the trail. I found a small, protected spot, drew out the bear canister and make some coffee in the moka-pot. I spent the afternoon snacking, drinking coffee and just sitting. 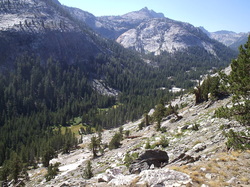 The next morning, I hit the trail early and waited until I hit the wall of this canyon to have coffee. I just sat, drank, and watched. It's beautiful here and this canyon was easily my favorite part of this trip. 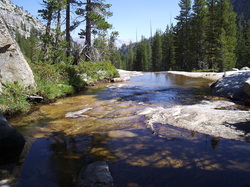 The South Fork of the Cathedral Creek snaked it way through the bottom of this canyon. Over granite shelves and grassy meadows. It's magnificent. With lots of water and many bivy sites, I look forward to spending more time here. 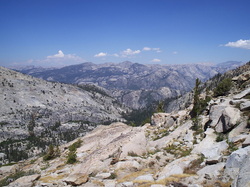 The trail leading South and up along the canyon turned East again an wove up and out of the canyon to Tuolumne Pass. It was easy going, but very much uphill. The wonderful views made it worth it. 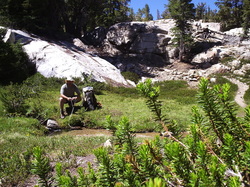 I was surprise to find water in the Tuolumne pass area. There were a few ponds, a small creek and snow-fed pond before the trail began to lead down. I wanted to spend the night up here, but I was worried that my sleeping system was inadequate. I lingered and explored a little bit before moving on. 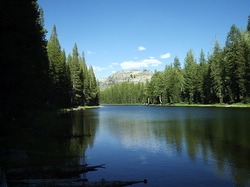 From Tuolumne Pass, I hiked down the flower covered mountain trail back into the forest near Polly Dome lakes area and started thinking about the awesome food at Glen Aulin. The workers there knew me and I knew that I would get fed generously. My pace quickened. I sped along the trail, pass McGee Lake and was at the Tuolumne River before I knew it. Glen Aulin lay on the other side. 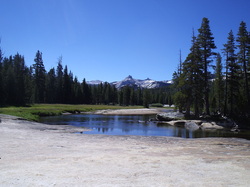 The next morning was a pleasant hike back to my work truck, which was parked at the Tuolumne stables. Hikers and tourists lined the picturesque Tuolumne River which accompanied me back to the meadows. A quick, sunny hike and I was at the stables before I knew it. What a great trip!