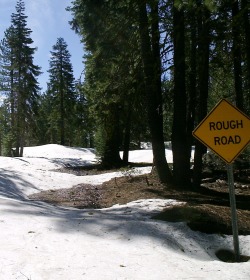 I set out from Gin Flat Saturday morning, about ten. The sun shone warmly and, aside from the snow cover at the beginning of the road, it was looking like the relaxing backpacking trip I was hoping for to kick off the summer.
My intent was to hike the North Rim trail from Gin Flat heading east along the north rim of Yosemite Valley and exit via the Snow Creek trail. I was in no hurry, especially because I was expecting a storm to keep me bunkered in my tent for a day. I had four days to make may across the rim, with a couple of early exits, if I needed them. My only concern was having to break in a last minute purchase, the Vaude Accept backpack from the Yosemite Mountain Shop.
The road to Gin Flat was in fine condition, but it was still a road, not what I was looking for, but the quickest, easiest way to my first night's destination, the summit of El Capitan. Tamarack Flat had some patchy snow and the creek was running high, covering the footpath across it, but after a quick search, I found a log to speed a dry crossing. 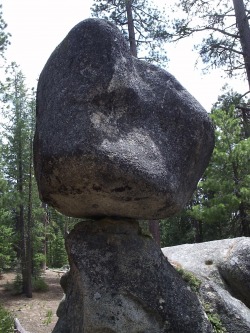 The road took me past some high country meadows and small challenges with the high running creeks. Deadfall always seemed to be available for the price of a bit of bush whacking. A couple of odd rock formations, chickadees and sunshine were my passive companions as I made my way down the abandoned road to the beginning of the North Rim Trail. 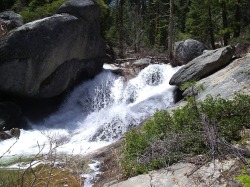 Finally, I was able to leave the road and head up a trail. Pine needles and earth softened my footfall and the trees hemmed in my path as the trail began to ascend. While the trail from Gin Flat to Cascade Creek dropped in elevation from roughly 7000 feet to 6000 feet, the trail from Cascade Creek to the summit of El Capitan would gain 2300 feet.
I certainly felt the elevation gain, but as this was my first backpacking trip of the season, I didn't push myself. I pretty much took it easy. The snowfield that I trudged through on the way up to Ribbon meadow began to tire me out, so I broke out the iPod and fired up Dane Cook. So, Dane Cook is insane and I'm cackling my way up this barren snowfield, staggering a bit from laughing so hard, when I bump into a dude. 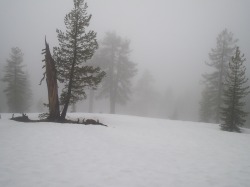 The conversation goes something like this:
Me: "Howdy, blah blah blah."
Legolas: "Hi, blah blah blah, I'm taking photos of bears and was heading to stay the night on El Cap, but lost the trail 'cause it's covered in snow"
Me: "Yeah, well, I'm heading to El Cap also, you're welcome to come with me, I'm pretty sure we'll find the way, after all I've got my GPS."
Legolas: "OK."
Please note at this time that his real name is not "Legolas." We actually introduced ourselves, but I forgot his name. Whatever.
At any rate, me and the elvish kid trudge our way (well, I trudged, he just walked) up to the top of the snow field when we delightedly made our way into Ribbon Meadow, which was a quagmire of snowmelt and marsh. The mushy-watery-snowy meadow wasn't too bad thanks to my Gore-Tex boots, but still was unpleasant. I'm getting a bit tired at this point (roughly nine miles in) but I'm still trying to get to El Cap to camp for the night, so I push on. 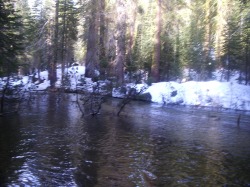 The marsh turns back to broken forest and then we head into dense forest as the creek grows louder. The snow has become deep, about four foot, in the forest and I walk on top most of the time. It's only bad when I break through... getting up requires a good effort.
The creek is impassable, so we fill up on water (also took the opportunity to fill one of my boots up with water) and search upstream for deadfall to cross on. We spot several trees fallen across the swollen and more-than-enthusiastic-to-kill-us-in-it's-freezing-water-before-we-sail-headlong-over-a-cliff creek, before we find one that we feel comfortable with. Actually, we find a pair. One that Legolas prefers and one that I feel more comfortable with. We both cross without incident and continue our trek through the deepening snow.

I should point out that I have a great little topographic mapping program, TOPO! that seems really nice. I only started playing with it in preparation for this trip. This would have been my first trip using the GPS and these kick ass maps that I printed out... if I had actually brought the one I needed. So, when I say it's a great computer program, I mean that it LOOKS like a great topographic mapping computer program.
Sooo, I'm really smart, and have only the nearly-useless-for-this-kind-of-trek park map and no-dice-in-the-forest-GPS and we cross the creek and we thinks to ourselves, "we've come a little ways from the creek, El Cap should be thataways!" We turn south and head uphill again onto what we are now convinced is just above El Cap and we make our way through the forest, with no sign whatsoever of a trail. We head south for about a quarter mile and by this time I am getting very tired. Only the thought of camping on the granite summit of El Cap is keeping me going. We come to a clearing and there it is!! The summit of El Cap!! Only a quarter mile across the El Cap Gully. Crap.
I'm exhausted. It's my first trip of the season. I'm supposed to be chilling my way across the Valley's north rim. But, I am a big fan of adventure and I grunt my way back up the hillside so we can cross the gully and finally Camp On The Summit Of El Cap. Arrgg! 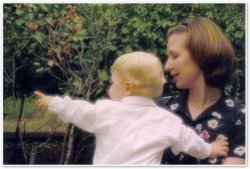 It's right there!
We know we don't have far to go. After all, It's RIGHT THERE! Through the forest once again, the light is fading and we hike into a clearing. From here we have a grand view...of...where the hell are we??
I see Sentinel Falls, Sentinel Dome, uh, Sentinel Rock and look-The Three Brothers just to our left (east). We missed El Cap? I take a GPS reading, now that we are in the open, and find that we have over-shot our mark and are on the EAST flank of El Cap and thanks to a forested ridge between it and us, we can't even see El Cap.
The largest chunk of stone in North American and we can't find it. 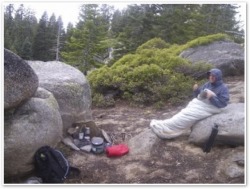 It all seems so obvious now. But, if one looks closely at the map that I didn't have at the time, there is a little hill blocking our view of El Cap's summit.
So, I'm done, it's 8:30PM, I can't see El Cap, much less how to get there and I'm tired and hungry. I tell Legolas that I'm camping here and he's welcome to join me. He agrees and I set my tent and assemble dinner. 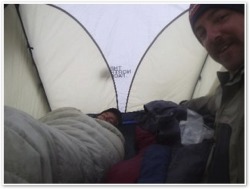 So I find out that not only is he seriously lacking in rain gear or bivy gear (not to mention even an extra pair of socks), but that he only brought enough food for tonight 'cause he didn't have a bear canister. He did bring a sleeping bag, but it was made out of down. I get the full inventory from the kid, make some mental calculations and inform him that a storm is supposed to be rolling in tomorrow. I tell him that I have enough space in my tent for two. I tell him he is welcome to join me if he chooses, just come in before he becomes wet. We have enough food for two days, plus a half day to hike out. He says "thanks, but I think I'll be ok."
That's cool with me and I chow down my dinner and wonder to myself why I bother with all this cooking. I think cooking is stupid. I make a mental note to start paring down on my cooked meals. Of course, I don't remember this mental note to myself until weeks later, but I digress.
I awake in the dark to strong winds deforming my tent and Legolas's headlamp shining. I tell him to come in and open up the zipper for him. He jumps in, settles down and I'm back to sleep.
We spent the whole day in the tent during the storm-aside from me securing the tent with stacked rocks, getting water, and the occasional trip to relieve myself. It was freezing cold, wet and generally very unpleasant outside, but we passed the time well, chatting, iPodding, sleeping, and reading. 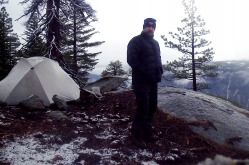 I was well prepared for a storm, thanks to getting caught by a blizzard in July last year up at Ostrander. Thankfully I had a full polypro base layer, three pairs of socks, full rain gear and a synthetic double bag. I brought my two man Talus tent, which has been a great tent for something like six or eight years and storm tested.

Legolas and I weathered out the storm in relative comfort, but the next morning did not look much better. It did look better, but I decided to wait a bit to see if the clouds would lighten up or clear.

Instead, we got more snow, but thankfully, less wind. I decided to wait until we got a window in the weather, but even if we didn't, by 11AM, we would have to leave in order to get us back to civilization at a decent hour.
At 10:45AM the snow and sleet stopped long enough for us to pack up the tent and hit the trail. We roughly followed our course back to Ribbon Creek through the snow and eventually found our trail that led us back to the world. The creek crossings were even more interesting thanks to the storm, but we faired well through all of them.
OK, maybe the creek crossing were deadly and insane.

The storm finally broke as we approached Foresta, providing us some great scenery. Shortly thereafter, me made it to the truck, concluding our trip.
We were alive, we even had all our fingers and toes, making this a successful excursion. It was certainly not what I had planned, but I still had a good trip, checked out some cool areas and learned some lessons along the way.