Time: 7 days after Tioga Road opening.
Duration: 3 days.
Details: From Tamarack Flat campground to Eagle Peak: 11 miles, with an elevation gain/loss of 3465/2073 feet. It took me about 5 hours hiking time, which includes extensive wanderings. From Eagle Peak to the Camp 4 parking lot: 5.25 miles, with an elevation gain/loss of 630/4300 feet. It took me only couple of hours of actual hiking time.
The mosquitoes at Ribbon meadow and Eagle Peak where not too bad, but at Eagle Peak meadow, they were capable of carrying off small children. I brought some Repel natural bug spray. There was plenty of water all along the trail, El Cap being the exception. If I were to camp on El Cap, I would carry extra water.
I've been looking forward to finishing this trail for the last month. Unlike my last adventure on this trail, this time I will not have to contend with snow, swollen creeks or the effects of a less than active winter.
Author: Jason 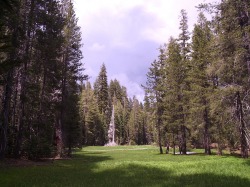 I had another relaxed start, around noon on Saturday. It was a warm sunny day with just a little breeze. Day hikers and campers from Tamarack Flat dotted the trail with chatter about what whom said to whom and what was on TV next week. The trail is really an old road, the Old Big Oak Flat Road, that has just been left to erode.
Nature folded in and embraced me as I left the road and climbed, old sleepy tree limbs above and a carpet of pine needles below. The trail brought me up and as soon as I saw an opening in the forest and found sweeping granite, I left the trail to explore the Western valley rim. 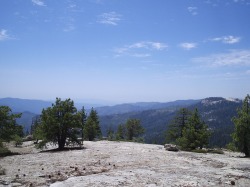 This led me to the area across from the Rostrum, Hwy. 41 and Turtleback Dome. I wandered around, as is my way, exploring whatever captured my curiosity. Eventually, I made my way to where I knew the trail would land.
I enjoyed hiking up the area where the snow field was, although it was much easier this time, and as I did so, realized that the trail actually makes a turn to the south. 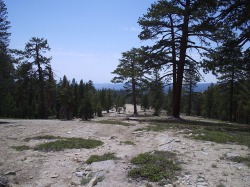 I had missed this turn last time and hiked into Ribbon Meadow, whereas I should have been south of it. This portion of the trail was favored by a few mosquitoes. Not enough to become a bother, but enough that I sprayed when filtering water. 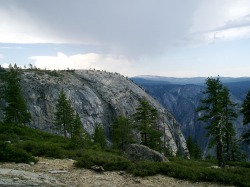 I filtered water from the west fork of Ribbon Creek, right along the trail and headed off again, crossing Ribbon Creek, which was much easier this time. The creek had simmered down to make the crossing simple and the trail led me off to the cliffs above Ribbon Falls. This area was pretty amazing, with the first real up and close view of El Capitan, the Cathedrals and a great side view of the Leaning Tower. The trail rose gently to El Cap's summit.

The top of El Cap did not disappoint. It was an amazing land of granite, floating above the rest of the world. I found a little alcove to eat lunch in and chatted awhile with some base campers from Yosemite Creek. They were city folks, but did not seem to have a hard time hiking out from their camp.

After lunch, I expected that I would be tired and I thought that it would be late enough to settle down and crash for the evening.

But, it was only 4PM and I felt like I was just strolling about the park. So, curiosity got the better of me and I headed to the cliffs, hoping to find the top of the rock climbing route known as the Nose. I hiked down from the summit where a massive western juniper (I think) caught my eye. It's thick trunk and stocky branches whispered to me of ancient times. It was incredible and beautiful, with soft, warm bark, delicate mosses and so full of texture. Wonderful. 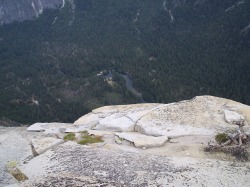 I left the tree and headed toward the cliffs. I found myself approaching this area with reverence, the abrupt ending of rock was awe inspiring. A certain mysticism grew in me, just like it did when I first came to Yosemite. Then, farther down, the world ended. I don't really know how to describe what it seemed like to be innocently walking around when suddenly, there was simply no more ground. Twenty, then ten, then five feet away, the ground just was no more. The top of El Cap is huge, and when it simply ceases to be, it is bewildering.
Moving eastward, I came across some climbers I knew, chatted a bit, and took off again. 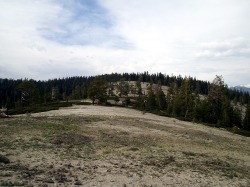 I headed back uphill to the summit and considered where I would crash for the night when I realized that I surprisingly wanted to keep going. The plan was to crash on the summit of El Cap, but I decided to keep hiking to Eagle Peak.
There was no water on El Cap, the last water was at Ribbon Creek, but I knew there would be water near the Eastern flank. I did find plentiful water there and moved on to Eagle Peak. 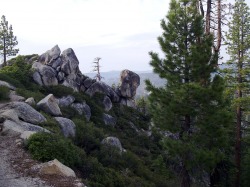 It was too quiet, too lonely. I needed to be around other people. This time of year there would be plenty of people at the top of the falls. I could get there just after dark, if I left now. Anxiety began to gnaw at me. I needed to get going.
None of this made sense. I didn't want to keep going. I wanted to just sit and relax and maybe explore around. I couldn't, however, as I grew increasingly anxious.
I chose instead to sit with this feeling, to let it wash over me and allow myself to inhale it. I am alone. After a while realized that loneliness is natural in this setting, the longing for companionship should not be a shameful thing. I accepted this and the discomfort eased. I sat mesmerized by the darkening sky, got ready for bed and slept soundly though the night.
The next morning I woke up feeling great. I made some coffee, had my morning meditation with a great view of the Valley and headed down to the top of Yosemite Falls.
The trail was great, but the Eagle Peak Meadow was swarming with mosquitoes. I zipped on the legs to my pants and donned a long sleeved shirt. I sprayed myself down, quickened my pace, but to no avail. The mosquitoes were so horny that they were just slamming into me. All over the exposed parts of my body, they bounced off of me. At times, I thought I was actually being carried by these little mindless demons.
As soon as I left the meadow, they began to abate and I began to get curious about some of the features around me. I began exploring the interesting topography surrounding the top of Yosemite falls and found a great many interesting little nooks and bivy sites. 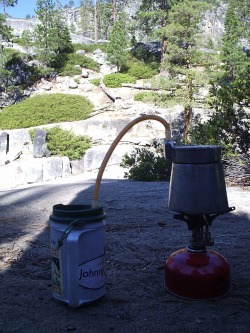 I made the top of the falls and settled down to another shot of coffee, watched the river flow, admired the other hikers and slowly sipped some especially good coffee.     After about an hour I got up and made the simple hike back down to the valley and across the street, to home.