Route: Off-trail south from Siesta Lake
Date: Trip 1: July 18 & 19, 2009; Trip 2: August 1 & 2, 2009
Duration: 2 trips of 2 days each
Author: Nancy
Header image: Unnamed pond south of Siesta Lake
I often spend time looking over the wilderness maps, not looking for anything in particular but just reading the names of the features and examining the topography. I follow the trails I've been on and seek out those I haven't. I study the areas that I've seen from a distance but haven't explored. I look for interesting formations or destinations and try to find a way to get to them. Sometimes the names of the lakes and peaks are so sweet or evocative—they practically beg you to come to them. Other times, unnamed features beckon you with the fantasy that you'd be the first ever to lay eyes on them. That's definitely a fantasy, especially in Yosemite National Park, but these features entice nonethetless. Jason had suggested to me and I agreed that we should set out off trail to look for a little unnamed body of water that lay south of Tioga Road. He had a general route planned, and we set out. 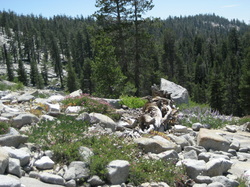 Off trail south of Siesta Lake
We started hiking in the early afternoon from Siesta Lake, which lies directly off Tioga Road. Jason had explained to me the proposed route, and I was carrying the map. I felt a bit disoriented stepping off into the forest without a trail below my feet. I had been off trail before, of course, but our trips had always started from a trailhead, so this method of starting travel was somewhat different. I was having trouble keeping straight in my head where we were and what direction we needed to go, and I felt rather disoriented. That feeling is uncomfortable to me—I at least like to feel oriented to north and south. But my worries over direction would soon be overshadowed by worries about sliding off the granite we began to scramble upward not far from where we parked.

I have an incredible fear of heights, and despite my desire to tame it, it remains with me. Jason and I were not climbing. We weren't even bouldering. We were basically walking up the face of knobby and sticky granite. But there I was, down on all fours, sweating and trying not to look down. I could feel my feet gripping the little ridges and nearly imperceptible ripples in the granite, but I could not get the image of rolling or falling out of my mind. One slip, I thought, and I'm gone.

Jason guided me across the open areas that were making me so nervous. He was walking up the granite as if he were on a Sunday stroll, so I felt a little ridiculous crouched down so low and nearly quaking with fear, moving painstakingly from one outcropping to another. He reassured me, though, that my fear was a matter of exposure. You can't be unafraid of scary situations that you're facing for the first time. And besides, he pointed out, I was doing just fine.

We soon finished moving upward and the expansive granite gave way to piles and piles of rocks and large pieces of talus on a gradual slope. We had moved into a bit of manzanita and overgrowth, so we began a little bushwhacking, heading to an open talus field on the rise beyond us. I was struck by the wildflowers that seemed to be blooming everywhere. This trip was my first during months in Yosemite when wildflowers are often dramatic and profuse. I didn't even know what I was looking at other the lupines that I recognized from flatland gardens, but I certainly appreciated the beauty. Butterflies and bees flew around them, making the scene so idyllic.

I enjoyed the hike over the talus field. The incline was very mild, and rather than being stacked on top of one another, these boulders had flat tops and bottoms and were mainly lying solidly against the earth. The area was large, and it was so interesting to look at. We stopped for lunch beneath a large pine tree that had put its roots down among the boulders. We were hiking at a leisurely pace, but we didn't really have far to go to reach the pond. Our only unknown was the route to get there. 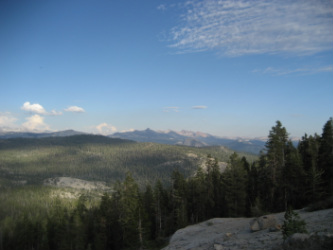 North of Yosemite Valley, looking south
After lunch, we continued across the talus field. Jason showed me how to check the topo map to see whether we were on course. I was able to recognize some of the landmarks he pointed out, and our plan was to follow a ridge around and then descend east from there toward our destination once some other landmarks came into view. We needed water and had seen a small drainage on the map, so we headed west off the ridge to search for it. It wasn't hard to locate even though it was small. The forest floor became lush as we approached, and the soil there must hold water even if the ribbon of a creek that flows through becomes a trickle. It was running fuller than I had expected, but we only filled our reservoirs partway because we expected to be reaching the pond soon. We then headed east again and climbed to the top of the ridge to get our bearings.

We had gotten a rather late start and had dallied around at lunch, so late afternoon was already arriving. We crested the ridge, looked around at the topography, and thought we had a good idea of where we were headed. We began to descend then, back into woods, expecting our destination when we got to level ground again. But we continued downward and downward, and the forest opened up onto a large and gently sloping talus field that we didn't expect. We checked the map, but we were too low now to see some of the more prominent landmarks we'd been navigating from. Time was passing, so we didn't a lot of time to do much more than decide to continue heading east and descending the ridge.

We bushwhacked through some heavy manzanita before entering the forest again. This time we were met by deep downfall—twigs, bark, limbs, and whole trees where piled ankle deep with soft underneath. The going was rough, and we both fell once or twice. And still our destination eluded us. Darkness was coming now, and we were going to have to stop and make camp soon. We knew we wouldn't be finding a little pond in the middle of the woods after dark if didn't find it in broad daylight. We also needed water. We forged on. 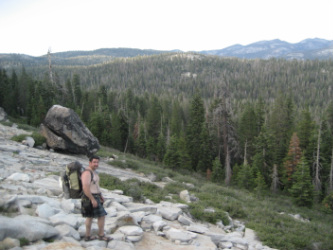 South of Siesta Lake, Yosemite National Park
The terrain began to flatten out, but no pond came into view. We did hear water, however, and suddenly crossed a trail. Jason knew immediately where we were: we had missed our pond to the north and reached the trail along Yosemite Creek. We were so disappointed! Not much could be done about it at that point, though. Darkness was quickly falling, and we needed to set up camp and eat dinner.

We hiked on the trail for a bit, wondering where we might camp. Never wanting to camp right off the trail, we were hoping to find something a bit secluded and near water. Just a little bit of light was left by the time we found something suitable—a flat, sandy area that lay just past a rise in the land. We were near the creek but well away from the trail. Jason put up the tent while I made a quick supper of noodles and dehydrated mixed vegetables.

Bats and other wildlife soon joined us as night arrived. Despite the closeness of the trail—it lay just over a small hump in the land—our surroundings were quiet, and we didn't hear or see anyone else. It was a warm night, and we elected to sleep without the rain fly over the tent, leaving just a thin mesh between us and a bright star-filled sky. It was beautiful. 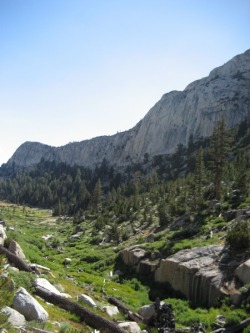 Echo Creek Canyon, Yosemite National Park
We awoke to frost on our backpacks outside the tent. The sun was bright and warm, though, and we enjoyed it along with a leisurely breakfast. I took another brief dip in the lake to cool my sunburn. Then we broke camp and headed out. We took a route out of the canyon that didn't quite work out, and we ended up cliffed farther down past the lake. Had I been more experienced, we might have tried to descend; instead, we walked back to the lake and crossed at another point. Even there, the trip down to the canyon floor was a bit intimidating for someone so new. I felt agile enough on the rocks, but even the lightweight pack on my back gave me a sense of being off balance as I crossed the sloping granite on our descent.
We traversed Echo Creek Canyon, and it was marvelous: tall cliffs on either side but easy walking through light forest and meadows. Small, warm pools of water had collected here and there, and a small, cool stream was still flowing. At the north end of the canyon, we began a brief ascent, and on the way down, we had wide views of distant peaks alternately lit and shaded by large clouds passing overhead.
We made fast progress on the downhill and reached Tuolumne Meadows once again to complete our trip. This first foray into wilderness backpacking was immensely rewarding for me both in learning experiences and in the pure enjoyment of getting back to the basics of life at high altitude with everything I needed on my back. It was a masterfully planned and executed trip, and I felt grateful to Jason for being willing to take me on the trip even though I knew nothing about backpacking and would be able to contribute very little to our overall experience. We made good traveling partners, though, and the trip exceeded my every hope and expectation.