Route: Gin Flat to Tamarack Flat Campground, onto the North Rim Trail to Yosemite Creek, return via Yosemite Falls Trail
Date: 2 days after Tioga Road opened
Duration: 4 days
Author: Nancy
Header photo: Half Dome, the Ritter Range, and part of Yosemite Valley viewed from El Capitan
This trip was my first after relocating to California in April 2009; it was my second backpacking trip overall and was slated to be one day longer than my first trip. I was backpacking again with my partner, Jason Lucero. We were packed a bit heavier for this trip, carrying a large Garcia bear canister (we didn't own a large enough BearVault) to accommodate a bit of extra food and treats that we anticipated wanting for this, our first trip of the summer backpacking season. I dubbed it the Carnival Cruise because we had so many treats like cookies and crackers in the canister. One of the unknowns for this trip—besides our level of conditioning—was stream crossing, as waters can often be high at this time of year from substantial snow melt at higher elevations, and we had one, possibly two, spots where we'd need to cross creeks. 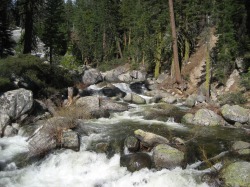 Cascade Creek, Yosemite National Park
We started hiking at about 1300 hours from Gin Flat down the road to the Tamarack Flat Campground (still closed at this time of the year). The start was a later one than what we would have preferred, and we also had a leisurely lunch at the empty campground before heading into the wilderness on the Old Oak Flat Road Trail. Also an old road, the trail is wide and easy to traverse. It was wooded and shady, and water was plentiful, flowing in small steams and from seeps along the trail. The one stream that crossed the trail before the Cascade Creek footbridge was flowing fully but not enough to cover large rocks and downed trees. The crossing was easy and uneventful. I really enjoyed this hike and the views that peeked in and out between the trees. There are lovely spots in the woods and odd rock formations, and I enjoyed looking at some of the plants that were just beginning to bloom. I was overjoyed at getting back into the Yosemite forests after being away for so long, so I felt myself slowing down and hiking leisurely just to be able to soak it all in and enjoy that feeling of starting a trip and heading for adventure.
After we crossed Cascade Creek and made our way onto the North Rim Trail, we were in need of water. We found a small creek flowing next to the trail and filled our reservoirs there. We continued uphill at a moderate pace. The hour was growing late, and we decided to bivy when we crested the hill. Water was in short supply in that area, however, so we had to hike a considerable distance downhill to Fireplace Creek to get water for drinking and dinner. Jason had brought an extra reservoir, which we filled as well. The hike for was tiring, and it was getting late. I just wanted to rest, but water is always a primary need to take care of, so even when it's heavy and arduous, it must be done. I worked through it. We set up camp and ate in the dark, which was less than preferable. From our site, however, we had a great view of the sunset and could see distant lights all the way into the San Joaquin Valley.

View toward Yosemite Valley from North Rim Trail
On the morning of the second day we were better able to appreciate our scenic bivy site. We had beautiful weather and enjoyed a leisurely breakfast before getting back on trail. Because we had brought the extra reservoir, we had plenty of water for the first part of our hike and didn't have to make the arduous trip back down to the creek to refill. We spoke with some other hikers before moving on.
The trail again gained elevation and crossed a bit of granite before returning to woods on the way to Ribbon Creek Meadow. We began to hit snow as soon as we entered the forest, and the trail became difficult for me to follow. The trail is flagged, but I was still uncertain about our course. We came across some lost day hikers, and Jason offered to lead the way. We crossed quite a bit of snow before arriving at Ribbon Creek Meadow, which was flooded but bright green and beautiful. We reached Ribbon Creek soon afterward and filled our reservoirs before heading over to the spot where the trail crosses. The creek was full and flowing  and the water was cold, but we were able to walk across easily. Another group of backpackers crossed behind us. We continued on uphill toward El Capitan.
As El Cap began to come into view, we crossed a small seep that crossed the trial. There's no water on El Cap, but we wanted to bivy there for the night. Even though we had filled our reservoirs at Ribbon Creek, we returned to this seep, which was flowing a bit steadier above the trail, after we made camp to obtain enough water for dinner and breakfast. It was heavy (again) carrying all that water from the seep back up onto El Cap. I sometimes dislike it, especially at the end of the day. But I'm always happy when we have plenty of water in camp for drinking, cooking, and washing dishes, so to me it's worth a bit of extra effort to go fetch it, even when it's physically demanding, and then relax.
The night on El Capitan was wonderful. We were able to make camp a bit earlier and eat before sunset. There was alpenglow on Half Dome, and we had grand views of the Yosemite Valley landmarks and distant snow-covered peaks. I took a lot of photos up there because I could see so much. The stars came out, and it was a fantastic place to watch dark fall. 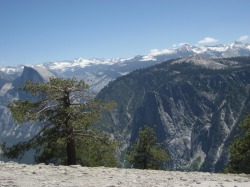 A view from El Capitan, Yosemite National Park
We enjoyed a leisurely morning in camp, washed up a bit since we had the full extra reservoir, and then spent a bit of time—a lot of time, actually—walking around on El Cap. We cooked up a quick lunch of soups before getting back on trail.
The trail loses elevation and crosses a bit of granite and then heads back into forest. We didn't hike far before reaching a small waterfall and creek that crosses the trail. There were a few hikers standing around. We got water and continued on through the switchbacks up to Eagle Peak and down through Eagle Peak Meadow, which was flooded but had surprisingly few mosquitoes. The hike from the meadow to the trial junction was exceptionally pleasant, though forest and near small hills and rock formations that beg to be explored. We stayed on trial, however, and reached the trail junction near Yosemite Creek. Water was plentiful in this area, and we looked around for a place to bivy. 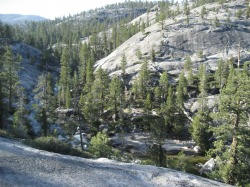 Yosemite Creek, Yosemite National Park
Our allotted time on the trail was over on the fourth day, so we had to head back to the valley. We broke camp and headed down the trail toward Yosemite Falls. We took the Yosemite Falls Trail and started our descent. I was not thrilled with the footing on this trail. The slanting rock "stairways" covered with slick grit and sand felt treacherous to me, and I ended up falling at one point. I was unhurt but displeased. The footing wasn't bad the entire way, but I was glad to see the trail ending even though I was disappointed that our trip was over.
We had intended to complete the entire North Rim Trial on this trip and exit at Snow Creek. But the combination of plentiful food, moderate conditioning, and our first opportunity to spend time together that didn't involve relocation or a flight back to the opposite coast translated to leisurely hiking and lingering at scenic views.