Route: From Tuolumne Meadows on John Muir Trail/Pacific Crest Trail through Lyell Canyon, turn west at trail junction toward Ireland and Evelyn Lakes, then return via Rafferty Creek Canyon to Tuolumne Meadows
Date: 6 weeks after Tioga Road opened
Duration: 3 days
Author: Nancy
Header photo: Kuna Crest viewed from the Ireland Lake vicinity
Tuolumne Meadows is one of my favorite places from which to start a trip. The drive to get there is scenic, and when we arrive in that wide basin with peaks in every direction, the trailheads seem to offer innumerable options for adventure and exploration. I always feel a bit of pleasurable nostalgia, too, because my first backpacking trip began in the meadows, and that grassy expanse will forever be colored by my fond memories of that experience. 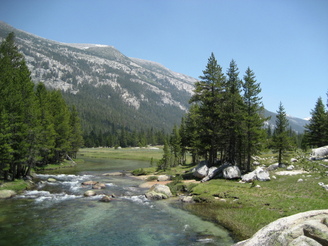 Tuolumne River in Lyell Canyon, Yosemite
We started hiking at about 1400 hours on the John Muir Trail and headed into Lyell Canyon. Once out of the woods near the trailhead, we didn't have to wait long at all to begin appreciating the scenery. The canyon is spectacular—the imposing Kuna Crest flanks one side and the voluptuous Tuolumne River cuts a curvy path through wide meadows that meet the steep crest on the east and the trail and wooded hills on the west. I was absolutely stunned and really had a hard time taking it all in. Add glimpses of distant high peaks that began appearing as we progressed southward on the trail, and this canyon left an impression that has never been forgotten. I think I could bivy for a week in that canyon and still want to stay longer. Lyell Canyon is simply about as inviting as any high country canyon can be.
But a bivy site was not on our to-do list for the canyon. We enjoyed the easy hiking and incredible view until we reached the trail junction and headed west toward the Ireland Lake area. The trail became wooded again at that point and started gaining elevation through some short switchbacks. A long cascade trailed through the forest, becoming audible long before it would be seen and remaining a constant presence throughout the ascent. When the trail leveled off, another long cascade was visible on the granite slope to the south.
We had gotten a rather late start for our first day of hiking, so by the time we finished climbing and reached the trail junction for Ireland Lake, the day was already heading into evening. We traveled a short way down the trail toward the lake, but as we hiked, the temperature seemed to drop significantly, so we returned to the trail junction and began to search the area for a bivy site. We were surprised by the robust flow of a nearby stream that wasn't on our map, but the abundance of water made it easy to decide to seek a more sheltered forested site in the vicinity. It took a bit of looking, but we found a place to make camp, had dinner, and settled in for what turned out to be a mild night. 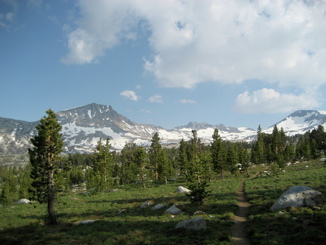 Trail to Ireland Lake, Yosemite National Park
We had a leisurely breakfast and decided to hike the out-and-back to Ireland Lake before heading down the trail. This trail was a fun one because it traverses a variety of gently sloping landscapes—forest, granite, and meadow—and keeps a backpacker in pleasant suspense, as the lake is situated deep in a valley at the end of the trail. Dramatic peaks surround the lake and seem to get taller and taller as the end of the trail approaches. Ireland Lake itself is beautiful in its starkness, which is accentuated by its being situated at the base of steep cliffs and surrounding hills. Parts of the trail were flooded from snow that was still melting nearby. Large patches of snow had formed snow cups, a phenomenon I was witnessing for the first time.
The wind became strong as we neared the lake. We lingered for a few photographs and to observe another distant party below us near the water. I marveled at the high peaks that I could now see clearly; Amelia Earhart Peak was most prominent at that point. I was glad to have my jacket to protect against the chill up there.
We left the lake then and returned to the trail junction, where we chatted with some other backpackers and pumped water at the snow-fed creek. The mosquitoes were a bit numerous here but were more of an annoyance than anything else while pumping water. They seemed to disappear once we started hiking again. The trail gained elevation slightly as we crossed a bit of granite and a scenic little pond came into view. We descended for quarter mile or so and then ascended again. Drainages around the pond formed several small streams nearby, but water was scarce once when we crested the hill. We hadn't hiked far but decided to bivy in this vicinity, which offered scenic views of Kuna Crest, the deep valley below, Choo-Choo Ridge, and Evelyn Lake. Jason hiked back down for water while I prepared hummus and hot beverages.
The mosquitoes were rather thick, which surprised us. They were somewhat bothersome during dinner but became less so as the sun set. A full moon blazed away, chasing off the darkness and lighting the granite around us. It was a gorgeous night, and we stayed up late taking photos and enjoying the bright moonlight.
We settled in then for what ended up being a cold night compared to the previous one. We were at higher elevation, and patchy snow nearby cooled the air even more. I was nestled deep into my 15-degree sleeping bag by morning and glad for my base layer.

View of the Kuna Crest near Evelyn Lake
We awoke to sunny skies, and the sun felt good after such a cold night. Given the cold temperatures, however, we were surprised at the myriad mosquitoes that had overtaken the bluff where we'd camped. It was crazy how many were flying about and how hungry they were. We prepared a hasty breakfast and ate it in the tent to get some relief from the swarm. Then we faced the task of breaking camp and packing up—the mosquitoes had not relented at all. To minimize the misery because we had no headnets, we walked quickly—ran, really—around the campsite, collecting our gear and stuffing it into our backpacks, staying in motion in an attempt to keep the insects from alighting and dining. We packed a dirty cookset and miscellaneous gear without much sense of order. Jason yelled at me to put my zipoffs on, but I didn't want to stop moving long enough to do that, and the mosquitoes didn't seem so bad on my legs. It was the attack on my arms and face that was so annoying. If anyone observed us running around on the ridge, they would have wondered what on earth was going on up there. We didn't even fold the tent; Jason just jammed it in the stuffsack and into his backpack. We beat a hasty retreat to lower ground, where a breeze off Evelyn Lake or some change in elevation or moisture provided relief. There we had a chance to assess the damage to our bodies, straighten out our packs a bit, and get our gear balanced and comfortable for our hike out of the wilderness.
Evelyn Lake is a picturesque little lake with a high granite slope on its southern side and a small outlet to the northwest. A little creek flowed out from one end into a large sloping meadow that surrounded the lake on three sides. We strayed off trail briefly when we left the lake and headed downhill to pick up the trail in the adjacent Rafferty Canyon.
The trail through the canyon is also the trail to Vogelsang High Sierra Camp, so there were quite a few other people day hiking and backpacking. We saw one runner, too. Although not as picturesque as Lyell Canyon, Rafferty Creek Canyon is quite beautiful. Distant peaks and surrounding slopes create interesting views, and the trail follows the creek as it winds and cascades downward on the canyon floor. The downhill hiking was easy, and we moved quickly to the base of the canyon, down some switchbacks, and once again into the northern end of Lyell Canyon to meet back up with the John Muir Trail and return to the trailhead in Tuolumne Meadows.
I had expected a shorter hike on the return, so we hiked longer than I thought we would to reach the trail junction, and for some reason I was ready to get back to the car. I felt a sense of dread about the returning work week, and leaving the wilderness is always so bittersweet for me. I hate saying goodbye and acknowledging that the trip is over. It felt good to hike fast, though, and Jason and I took turns in the lead. We cooled off near the scenic bridge over the Tuolumne River before returning to our car for the trip back to Yosemite Valley. Our first purchase when we returned was a pair of Sea to Summit head nets to help combat the next mosquito swarm. Those pesky insects were the only blemish on this spectacular high-elevation trip. I left Lyell Canyon wanting more time in this area. The many interesting features of the surrounding area and the canyon itself definitely piqued my interest.