Six day backpacking trip in and near Yosemite. It was a long time in coming! Ethical and safe trip, we talked to the local rangers to ensure we were being safe and good to the mountain communities. But, tough start! Something about "lounging around the apartment for 90 day in one's underwear, watching The Office and eating vegan Pop-Tarts" -Nancy.
Three years since the last backpacking trip and we were more than ready. We were very much in need of a wilderness trip. While our memories were foggy, we still had valuable resources; a decade of adventure backpacking trips, custom food prep spreadsheets, gear data lists and pack lists, and a haphazard and unorganized list of valuable information that we had compiled.
We had been used to preparing most of our food from scratch, but I wanted to try a selection from Outdoor Herbivore for many years. This was a good opportunity to try them out as a backpacking food source, and as an emergency food source. I made an order that covered about half of our meals.
Our gear was also out of date, but we had been preparing. A new tent from Big Sky arrived the year before, replacing the ten year old tent I had previously bought from them. This is an excellent tent.
​My pack was about eight years old, so I sold it last year, picking up a Mountain Hardware Alpine Light to replace it. Miscellaneous gear had been replaced or updated, but some things that I wanted I could not find. There, I set to design and make them myself.
The prep for the trip that used to be easily completed as a normal part of life now required special attention. My life is no longer set up for backpacking. Long nights preceded the trip, and the night before we slept four hours. Departure the day of the trip was delayed for last-minute details. Our pack weights for the trip, including food and a BearVault BV450 for each of us were about 24 pounds.
The wilderness permit is easy to get and are required for backpacking here. They can be acquired at the Groveland Ranger District Office: https://www.fs.usda.gov/recarea/stanislaus/recreation/outdoorlearning/recarea/?recid=82590&actid=120
A lot information is available for this area on the website, but you can also email or call them.

The drive in from the 120 is long, steep, and follows a curvy road. It's a long drive, bring plenty of water for before and after the trip. There are bear boxes at the trailhead, so store your smelly stuff.
The trailhead road had opened from the last time we were here, allowing a hike in about 4 miles shorter than last time. The trail started off nicely enough, but after the fork, up on Kibbie Ridge we encountered deep overgrowth. I had to trade out my kilt for a pair of zip-offs to keep the brambles from slicing my skin. But, there was a lot of deep brush pushing and I was sorely out of shape.
There was a lot of water along the trail, creeks were still moving, but so were the mosquitos. Headnets were desired on the first night. Thanks to a very late trail start, lack of sleep, and my Pop-Tart belly, we halted for the day about 3.5 miles in, along Kibbie Ridge and made camp near a creek.
The next day was easier on me, but I had to push. I was no longer in the backcountry 30 days of the year.
​The trail to Boundary Lake was overgrown on this part, but we would later find that the trail crew was cleaning up about a few days behind us. It was 7 miles along an easy trail to Boundary Lake. Still some thick underbrush, but it was cleared out by the time we made our way back a few days later. Lots of water along this trail in July, even though it was a less-than-average snowpack year. 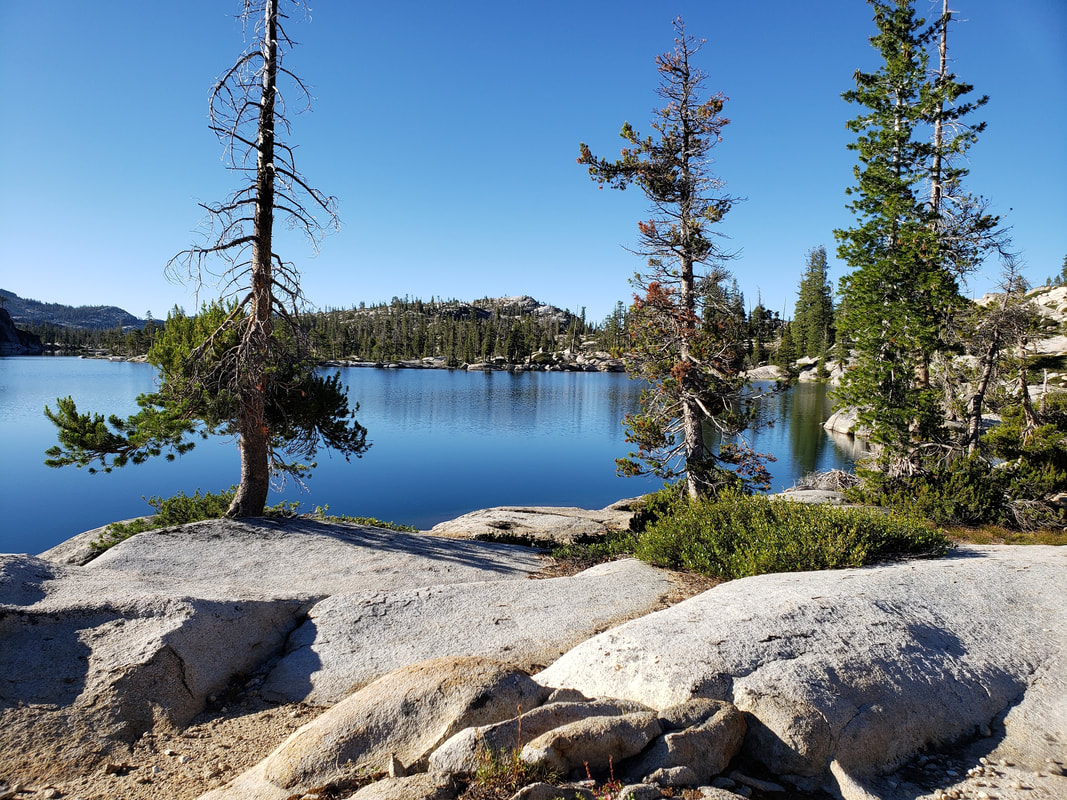 We decided to layover at Boundary Lake for a couple of days and explore the area. We got to try out some of Outdoor Herbivore's food and do some day hikes. All the bivy sites were close to the lake, but there was a lot of lake, so I hope we didn't trouble the wildlife.
After a few days in the Boundary Lake area, we made our way to Kibbie Lake. We decided to go cross country to Kibbie Lake from Kibbie Ridge. The land was thick with deadfall and underbrush, but the view over Kibbie was worth it. It was 7.75 miles to Kibbie, with this shortcut.
I would not suggest any off-trail hiking to anyone but very experienced backpackers in this region. It's is thick, with steep ravines and lots of deadfall, small ponds, and marshes.
It was nice to visit Kibbie Lake again. We found a small glen and got to chat about the adventure we got ourselves into the last time we were here.
The exit from Kibbie is about 5 easy miles to the trailhead. There are a few water sources along the way, but one might as well fill up at the lake.
I also got to test out some new gear ideas that I had been working on.
I've been using a Fiskars trowel for backpacking for about 30 years. It's super strong and cheap. It also has a void in the handle to store something. I usually find these at a hardware store for under $5.00.  With the retractable Sea To Summit shovel weighing 3.1 oz, the GSI standard shovel weighing 2.8 oz, this far stronger shovel weighs only 3.3 oz. A deal in my book.
https://www.fleetfarm.com/detail/fiskars-nyglass-transplanter/0000000019286
I like it so much, I designed and printed a skid to hold an emergency packet to toilet paper and a baggie. It worked great! Now I can stuff the handle with impunity and pull the contents out easily.
​
I also make a canister stove stand. It has three adjustable feet and a bubble level. The level is not really needed, but the adjustable feet are nice. And, it's also a phone tripod with a ball-and-socket adjustment. This, I really did like.
Nancy is still digging her backpacking bidet, the Sierra Squirt that I designed and have been producing. She is really happy with it! 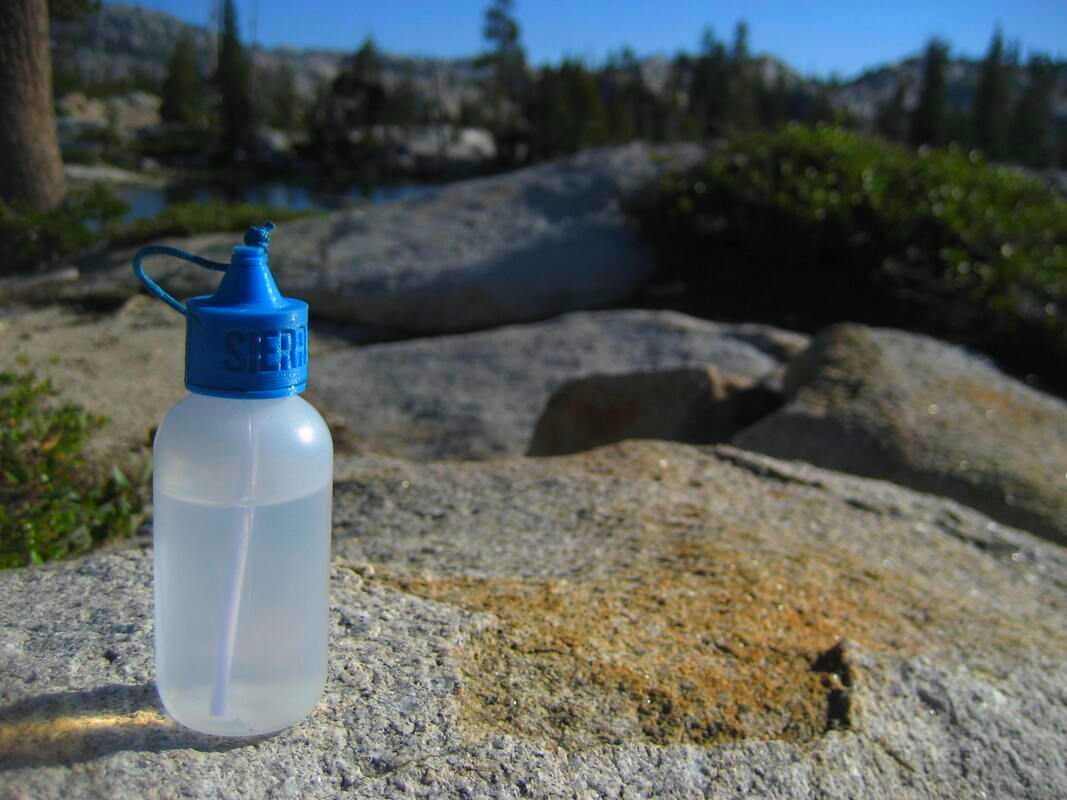 The backcountry solar panel that I made many years ago finally broke a wire. I really need to upgrade this, so I hope to get it done by September. It needs new wiring, weatherproofing, and maybe an electronics enclosure. I'm honestly surprised it lasted this long. Up to 400mA @5V. Not bad for 2 oz. 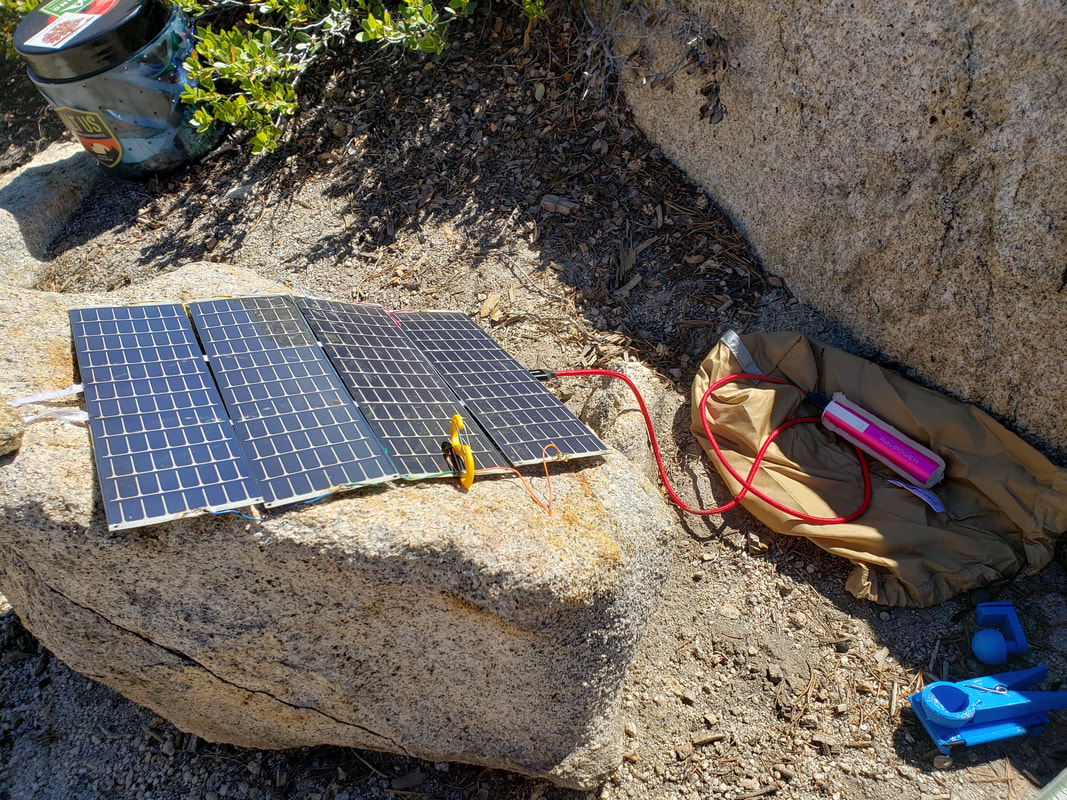 The coffee/tea steepers are pretty much a pain in the ass. They work, but are more trouble than they are worth. I'm ditching this idea. 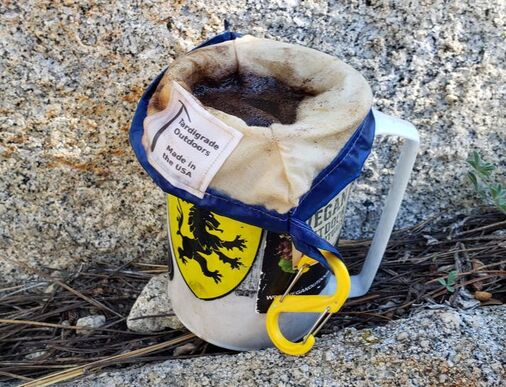 This was a great trip. So nice to get back into the wilderness again.